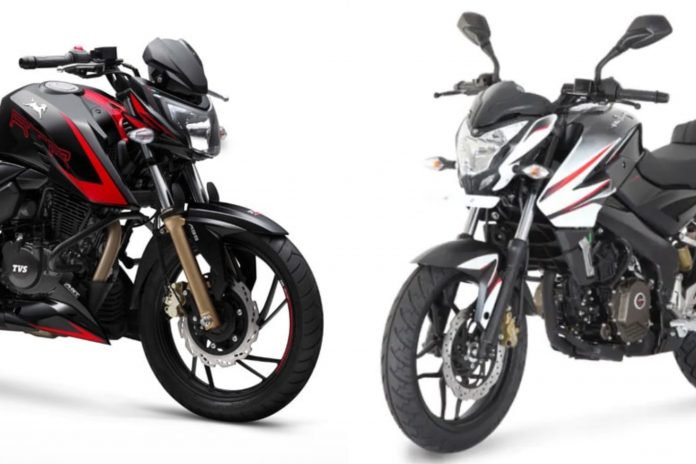 You are facing confusion and unable to make your decision to purchase TVS Apache RTR 200 4V or Bajaj Pulsar NS 200. Worry not, we are doing a comparison between the two motorcycles. Every specification and feature of both will stand against each other.

The TVS Apache RTR 200 4V ushered in a new era of performance-oriented motorcycles from the bike maker, making it the company’s first bike with a 4-valve head. TVS has provided the naked with a few updates, the last one being the BS-6 updates it received late last year. While available in multiple variants earlier, the RTR 200 4V BS6 is available in just one trim.

The Bajaj Pulsar NS 200 was launched in April 2020. It is placed above the Pulsar 220F. The naked motorcycle gets three new dual-tone paint schemes- red/silver, black/grey and black/silver paint schemes to set it apart from the older model.

TVS Apache RTR 200 4V features a 197.7 cc single-cylinder air-cooled motor, with an oil-cooler, is fuel-injected, that outputs the power of 20.5 PS at 8500 rpm, which is constant, and the torque of 16.8 Nm at 7500 rpm, which decreases as compared to the BS-4 motor. The engine is mated to a 5-speed transmission which gets slip and assist clutch. If we talk about the brakes, then the motorcycle uses the petal disc brakes at both ends with dual-channel ABS.

Bajaj Pulsar NS 200 features a 199.5 cc single-cylinder, liquid-cooled, fuel-injected engine that outputs the power of 24.5 PS at 9750 rpm and torque of 18.5 Nm at 8000 rpm. The engine is mated to a 6-speed transmission. If we talk about the brakes, then the motorcycle uses the petal disc brakes at both ends with single channel ABS.

TVS Apache RTR 200 4V gets a muscular and sculpted fuel tank, split seat setup and dual-barrel exhaust. It now gets a LED headlight. Glide Through Traffic technology, and smartphone connectivity are main highlights of the BS-6 version.

The SmartXonnect feature on the TVS Apache RTR 200 4V enables you to connect your smartphone to the motorcycle’s digital console via Bluetooth. By pairing the smartphone, you can get call and SMS alerts, turn-by-turn navigation, and other vehicle diagnostics messages. Post the ride, you can also check the analytics of your past ride, lean angles, and G-forces experienced.

The color options available are Gloss Black, and Pearl White.

The Pulsar NS 200 comes with sharp, aggressive street-fighter styling with a muscular mass-forward look. It gets a halogen headlamp with pilot lamps and a semi-digital instrument cluster.  The motorcycle gets the funky wheel rim graphics that are color-coded with the bike. It also gets a belly-pan fairing as well.

It is only available in one variant that is TVS Apache RTR 200 4V STD, which is priced at INR 1.25 lakhs.

It is only available in one variant that is Bajaj Pulsar NS 200 BS6, which is priced at INR 1.29 lakhs.

The pricing of both these motorcycles is roughly the same, with some differences in different aspects. So, it is up to you which motorcycle are you gonna pay for.