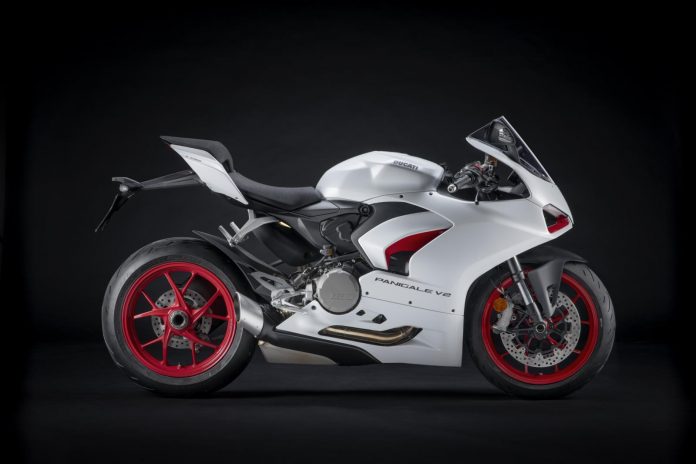 From some time, Ducati is teasing it’s anticipated motorcycle the Ducati Panigale v2 on its social media pages. But due to ongoing global pandemic, the launch has been delaying since forever (as it feels). Now it seems that the delay is not going to stay for long as the Italian motorcycle manufacturer has stated on its social media pages that the pre-bookings of the Ducati Panigale v2 are begun.

The upcoming Ducati Panigale V2 will be the company’s first BS6-compliant product in India. It will replace the Panigale 959 which retailed at INR 15.3 lakh (ex-showroom). The Panigale V2, which will be brought in as a CBU, will carry a higher price tag. The deliveries of the new motorcycle are expected to begin in September.

That’s why all the experts in the industry are doing assumptions that it can launch in the ongoing month of August. Let’s get into the details of the new Ducati sportbike.

The new Ducati features a 955cc Euro5-compliant V-twin engine that outputs 55 PS of power at 10,750 rpm and torque of 104 Nm at 9,000 rpm. Hence, there is an increment of 5 PS and 2 Nm over the older bike. The engine is mated to a six-speed gearbox transmission which helps the Panigale v2 from the Ducati Quick Shift bi-directional quick-shifter system.

The shock absorption tasks are handled by 43 mm Showa Big Piston Fork at the front and a Sachs mono-shock at the rear. If we talk about the brakes, then there is a 320mm disc brake at the front with M4.32 Brembo monobloc calipers and a single 245mm disc at the rear with a single Brembo caliper.

The styling cues on the new Panigale V2 include a twin-pod headlight, full-fairing design, split-style seats, and single-sided swingarm. The motorcycle uses a die-cast aluminum monocoque frame that uses the engine as a stressed member.

The feature list on the Ducati Panigale V2 includes LED headlights with LED DRLs at the front, an LED taillight, and a Bluetooth-enabled 4.3-inch color TFT display. The Ducati Multimedia System offers access to incoming calls, select and listen to music or receive text messages.

It will be available in two color options, that are, sporty monochrome Ducati Red and White Rosso Livery. The price of the Ducati Panigale v2 is expected to price INR 15 lakhs to INR 16 lakhs.

Check out the list of the top sportbikes in India.
Also, check out the new Honda CBR1000RR-R Fireblade.

Coming Soon: Upcoming Motorcycles To Be Launched in India