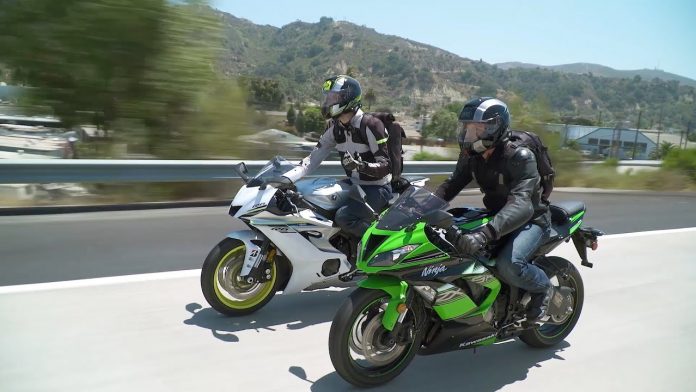 A sportbike, or sports bike, is a motorcycle optimized for speed, acceleration, braking, and cornering on paved roads, typically at the expense of comfort and fuel economy by comparison with other motorcycles. Here, is the list of Top 5 Sports Bikes in India.

Yamaha YZF R15 V3 is at the 5th position in the list of top 5 Sports Bikes in India.

Yamaha YZF R15 v3 runs on the 155cc single-cylinder liquid-cooled 4-valve motor with Variable Valve Actuation (VVA). But this time there is a slight downgrade on the power output division. In YZF v3 the output power is 18.6PS and 14.1Nm, which are 0.7PS and 0.6Nm less than its BS4 counterpart. If we talk about the brakes then it is packed with a 282mm disc with a twin-piston caliper on the front wheel while the rear wheel gets a single-piston caliper acting on a 220mm rear disc. Fortunately, the size of the tyres remains the same as the previous version. But still, it is the most powerful bike in this price segment.

It is currently priced at INR 1.46 lakh which is undoubtedly a great price for the aforementioned specs.

Bajaj Pulsar 220F is at the 4th position in the list of top 5 Sports Bikes in India.

It is powered by an updated 220cc fuel-injected motor which makes 20.4PS, which is 0.53PS less than the BS4 variant. The torque remains the same 18.55Nm. It continues to use a 5-speed gearbox. If we talk about the brakes then it is packed with disc brakes at both ends paired to a single-channel ABS.

It is currently priced at INR 1.19 lakh.

Bajaj Pulsar NS 200 is at the 3rd position in the list of top 5 Sports Bikes in India.

Bajaj Pulsar NS200 BS6 is powered by a 199.5cc liquid-cooled SOHC 4-valve single-cylinder motor. This BS6 compliant motor is equipped with a fuel-injection and is expected to deliver slightly more power than the BS4 variant’s, which has an output of 23.5PS and 18.3Nm. It continues to use a 6-speed gearbox. If we talk about the brakes then a 300mm front disc and 230mm rear disc is equipped with the bike. The Pulsar NS200 comes in a sporty design, that is unchanged since its launch in 2012.

It is currently priced at INR 1.28 lakh.

Royal Enfield Himalayan is at the 2nd position in the list of top 5 Sports Bikes in India.

Royal Enfield has done great work on the refinement of the 411cc single-cylinder engine. The current BS6 power unit is certainly a lot smoother than the first one that was in 2016. The engine produces 24.31PS and 32Nm, which is 0.13PS lower than its BS4 guise. The five-speed gearbox remains unchanged. The Himalayan BS6 is a good off-roader due to its great suspensions. Because it gets a 21-/17-inch spoke wheel setup that comes shod with dual-purpose CEAT tyres. If we talk about the brakes then it comprises a front 300mm disc with a twin-piston calliper and on the rear wheel, you get a 240mm disc with a single-piston calliper. The new colours make it look more delectable, heightening the appeal of the adventure motorcycle.

KTM RC 200 is at the 1st position in the list of top 5 Sports Bikes in India.

The engine of KTM RC 2020 has been slightly dropped down by 0.83PS and 0.2Nm to 25PS and 19.2Nm. But it is still the most powerful 200cc bike in India today. The engine continues to feature fuel-injection but doesn’t get ride-by-wire like the 390s. KTM RC 200 has WP suspension at both ends – an upside-down fork and preload-adjustable mono-shock. If we talk about the brakes then it is featured with ByBre disc brakes at both ends (300mm/230mm) with the assistance of dual-channel ABS.

It is available in two colors: black and white.

It is currently priced at INR 2 lakh.

Conclusion: This list is not in any specific order and it is my personal preference.

Recently, there has been launched a Kawasaki superbike, which is priced at a higher price.
Check out the list of upcoming motorcycles in India.

How Can You Put a Child Seat on a Full Suspension Bike?