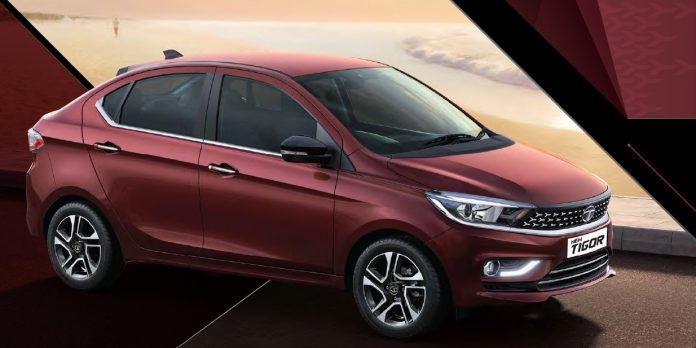 The Tata Tigor was launched back in the year 2017 and since then, it is making boom of business for Tata Motors. Recently, it got the BS-6 upgrade and they are some pretty impressive upgrades. This car was born directly from the same project that originated the Tata Tiago (internally called “Kite 5”) as it represents the four-door sedan version with a third rear volume.

Back when the Tata car was launched in the year 2017, like the Tata Tiago, also Tigor uses the Tata X1 platform, re-engineered respect to the old platform version used by Indica and later by Bolt. The wheelbase compared to the Tiago is stretched by 5 centimeters to increase the rear habitability. The Tigor is a front-wheel drive, the suspension uses a very classic scheme: MacPherson front end with stabilizer bar wheeled rear axle with twist bridge. It is available in five colors, Pure Silver, Pearlescent White, Deep Red, Daytona Grey, and Arizona Blue.

The car is powered by the 1199cc BS6-compliant 1.2-litre, 3-cylinder petrol engine that outputs 85PS at 6000rpm and 114nm at 3300rpm. The engine is mated to a 5-speed manual gearbox as standard. As well as, the Tata also offers a 5-speed AMT option. If we talk about the brakes, the front is disc brakes and rear are drum brakes. The fuel tank capacity is 35 litres and the average is 20.3 kmpl as per the reports from the car owners.

The Tigor has dimensions of 3993 mm in length, 1677 mm in width, and 1532 mm in height. It also has a huge boot space of 419 litres. On the exterior, it gets the new grille and bumper, like the Tiago, while the new fog lamp housing now incorporates LED daytime running lights. The new and upright grille with the chunky black bar in the middle and looks smart. The bumper has been reworked and includes a skid plate, while fog lamps get new housing and include the C-shaped chrome elements.

At the interior, it gets the premium dual-tone interior elements like seats and the dashboard. The Tiago top variant features the 7-inch Harman touchscreen infotainment system with voice command recognition through Android Auto and Apple CarPlay. It also gets auto-fold ORVMs that are electrically adjustable.

On the security front, Tiago gets the dual front airbags which prevent the occupants from striking hard surfaces like dashboard during an impact, thereby, minimizing injuries. It also has rear parking sensors and a camera with a display that alerts the driver in case of any obstacles while reversing. Easy parking in tighter spaces with the help of guidelines.

Other launches include Toyota Corolla Cross and Renault KWID RXL.
Also, check out new Audi RS Q8 and Audi RS7.
If you considering the purchase of new cars, then you should