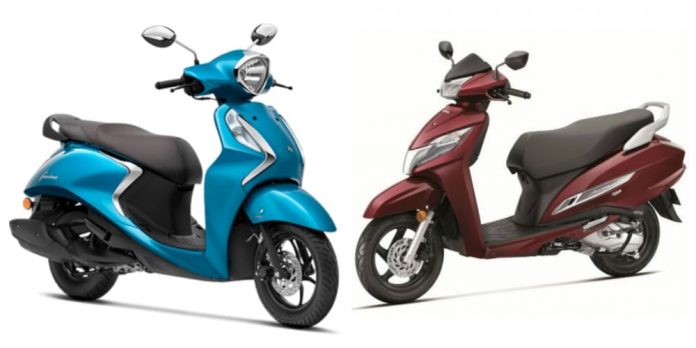 You are facing confusion and unable to make your decision to purchase Yamaha Fascino 125 or Honda Activa 125. Worry not, we are doing a comparison between the two scooters. Every specification and feature of both will stand against each other.

The Yamaha Fascino is the Japanese brand’s best-selling scooter in the country. One of the USPs of the scooter is its Vespa-inspired styling. On the other hand, Honda has always been ahead of the curve when it comes to adhering to the everchanging automobile laws of our country. Not surprising then, the Honda Activa 125 became the first BS-6 two-wheeler in India.

Yamaha Fascino 125 features a 125 cc engine that outputs 8 PS of power and 9.7 Nm of torque. The single-cylinder engine of Fascino 125 has an automatic gearbox. Both rear and front brakes of the Yamaha scooters are drum brakes. It uses either a 190mm disc upfront or a drum unit, along with a drum at the rear, with CBS as standard.

The scooter weighs at 99 kg, making it the lightest 125 cc scooter on sale in India. Yamaha claims the engine offers 16 percent better mileage than the Fascino BS4. That means the mileage should be around somewhat 66 kmpl, but according to Fascino owners, the fuel average is 50 kmpl.

The scooter weighs at 111 kg. Honda claims that it will be 13 per cent more fuel-efficient than the BS4-compliant. The fuel average is 50 kmpl, whereas the older BS4 motor was only able to deliver 46.7kmpl.

The design of the Yamaha Fascino 125 is similar to its 110 cc sibling. The curvaceous panels look bigger in the scooter and the tail section looks noticeably longer. It has a more defined form with prominent chrome accents. This gives the scooter a more mature and premium look. The redesigned headlamp gets a concave lens while the new tail lamp gets a ‘V’ pattern.

Honda Activa 125 gets an LED headlamp, an external fuel filler cap, and a side-stand engine immobilizer. Also, a pass light switch, and the four-in-one ignition key slot that unlocks the seat as well. The major change is a mechanical one – the rear suspension is now preload adjustable.

The ACG (Alternator Current Generator) starter feature, the starter gets rid of the conventional starter motor, making for quieter starts. While an engine-kill switch comes as standard on the standard and alloy trims, the deluxe trim gets the idling stop system. Also, features a new semi-digital instrument console that shows the average and real-time fuel efficiency as well as distance-to-empty readout.

The Yamaha Fascino 125 is available in four variants -:

The pricing of both these scooters is roughly the same, with some differences in different aspects. So, it is up to you which scooter are you gonna pay for.

Check out the Reviewing Best Scooters in India.