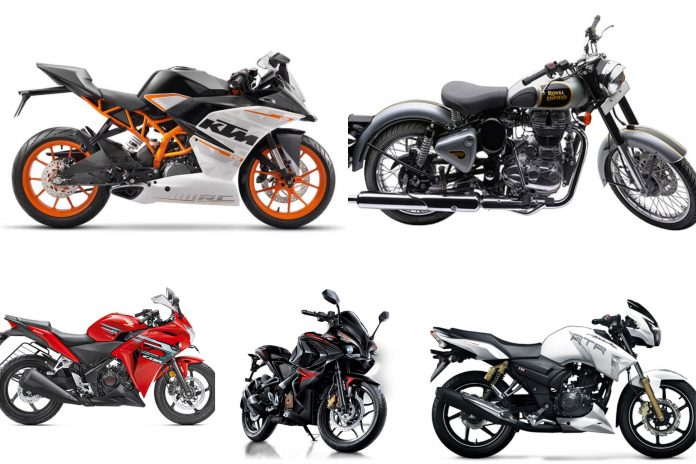 As we all know that the “Made in India” initiative, launched by the Government of India and Prime Minister Narendra Modi, is a huge success and boasting around the world. So, here we are mentioning some Made in India motorcycles, that are proudly made in our nation.

As we Indians love motorcycles very much, resulting in which the country becomes the largest market for two-wheeler vehicles. On the auspicious occasion of Independence Day, we present you with the list of motorcycles that are exclusively made in India.

Honda motorbikes have been the synonym of performance bikes in India for a very long period. In fact, there is no doubt that Honda bikes have always been in great demand for the reliability they offer to the buyers. The CBR 250R, with its high quality, make, superbly refined engine, and modern-day sporty looks are easily the dream bike of many motorbiking enthusiasts of the country today.

However, the CBR 250R has been discontinued in India. There is another version, known as the CBR 250R Repsol edition. It features a 249cc engine that outputs the 27 PS of power at 8500 rpm and the torque of 23 Nm at 7000 rpm. The engine is mated with a 6-speed manual transmission. It’s been priced at INR 2 lakhs.
Also, check out the new Honda CBR1000RR-R Fireblade.

The Royal Enfield Classic 500 is another model from the legendary motorbike manufacturer of India. This classic looking machine. One of the most popular bikes originating in India. In addition to the improved engine and performance, the looks of this gorgeous RE is also a great value add for the bike.

At the heart of this beautiful thumper is the latest 499 cc engine from the Twinspark Royal Enfield engines that allows the Classic 500 to produce a peak power of 27.2 PS. Of all the Royal Enfields, the Classic 500 is certainly one of the easier-to-control bikes, giving it the much-needed stability while riding at high speeds, within the city or on the highway. The engine is mated with a 5-speed manual transmission. The mileage of the motorcycle is 32 kmpl. It’s been priced at INR 2 lakhs.

TVS Apache RTR 180 falls into India’s most popular 180 cc segment. TVS rolled out this model equipped with ABS making it the first bike of its kind to come with the much-needed safety feature. This particular model of the RTR has revamped headlights with LED. The overall look with sharp edges of the bike is what I think makes this machine look mean and sporty. It is powered by a 177.4 cc, 16.79 PS at 8500 rpm, 4 stroke engine with 5-speed manual gearbox.

Being an Indian manufactured bike, the mileage is something that cannot be undermined and that’s exactly what has been taken care of by TVS since the bike can easily offer a mileage of 47 kmpl on the highway. It’s been priced at INR 1 lakhs.
Also, check out TVS Radeon.

Bajaj Pulsar RS200 has a very stylish look and a 6-speed gearbox. Bajaj’s Pulsar series of motorbikes have been a great hit with the Indian bikers since the very first Pulsar was launched way back in 2001. Since then, many Pulsar variants have been introduced by the company. The Pulsar RS200 is by far the most modern and well equipped of all the Pulsars to date.

This fully fared sports bike comes after their earlier model Pulsar 200NS which was also very successful. With attractive features, stunning looks and the adrenaline rush that you get riding the Pulsar RS200 is amazing. It features the 199.5 cc engine that outpts 25 PS at 9750 rpm and 18.7 Nm of torque at 8000 rpm. The dual channel ABS is its main highlight. The engine is mated with a 6-speed manual transmission. The rush and raw power the bike exhibits, is simply impressive. It’s been priced at INR 1.49 lakhs.

Bajaj Auto Ltd. has gone on to revolutionize the Indian motorbiking scene with the introduction of their KTM line up. KTM RC390 is one of the most beautiful offerings from their stable that was launched in 2014. There’s a sense of urgency in RC390 that makes it such a special and fun bike to ride.

KTM now manufactures this beast of a bike in their Pune facility. One of the punchiest motors that we have ever seen in this segment, combined with KTM’s visible racing genes. The new KTM RC390 is certainly one of the most popular bikes to be manufactured in India today. It features a 373 cc engine that outputs 43 PS of power and 37 Nm of torque. The engine is mated with a 6-speed manual gearbox. It’s been priced at INR 2.5 lakhs.

Conclusion: This list is my personal preference and it’s not in any kind of order. It’s an obvious random list.

Check out these article of Top 5 Sportbikes and the top motorcycles under INR 50000.
Also, check out the Kawasaki Ninja ZX-25R.