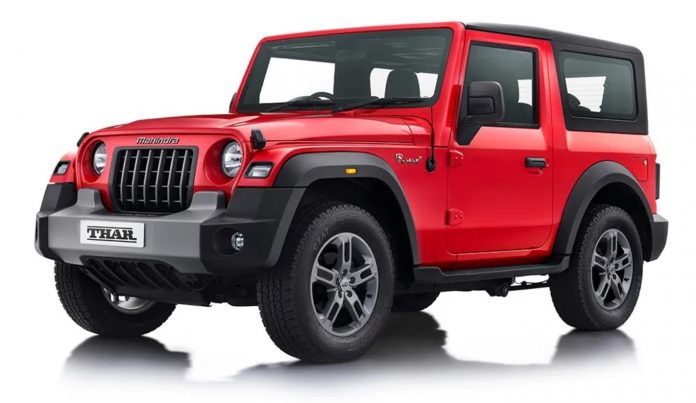 Today, on the auspicious occasion of the Independence Day, Mahindra unveiled it’s new Thar 2020. It’s no coincidence Mahindra chose India’s 74th Independence Day to unveil its next-gen off-roader, as it wants its new 4×4 to be viewed as an icon of freedom. The new Thar will launch on the 2nd of October.

The Mahindra Thar 2020 should be priced between 12 lakhs to 16 lakhs.
It is BS-6 compliant and got some major updates. It will take on the Maruti Jimny, Force Gurkha, and similarly-priced compact SUVs like the Kia Seltos and Hyundai Creta. Let us know about the details of the Mahindra Thar 2020.

The new Mahindra Thar will come with multiple engines and gearbox options. It will be offered in two variants:
AX for adventure-seekers and LX series for the lifestyle buyers.

The petrol engine and a choice of an automatic gearbox for the first time. The Thar features a new 2.0-litre ‘mStallion’ petrol engine that outputs 150 PS of power at 5000 rpm, and max torque of 320 Nm at 3000 rpm. The engine is mated to a 6-speed manual gearbox as standard and also the option of a 6-speed automatic.

The new Thar’s diesel engine is a 2.2-litre mHawk unit that outputs 130 PS of power at 3750 rpm, and max torque of 300Nm at 2800 rpm. The engine is mated with a 6-speed manual gearbox as well an Aisin-sourced 6-speed torque converter automatic.

On the exterior, it retains the iconic Jeep Wrangler-inspired seven-slat grille which is flanked by rotund halogen headlamps with LED daytime running lamps on the front fenders. The high set flat bonnet with exposed hinges, squared-off windshield, and prominent bumper round off the front. The Thar will be available in a two-door configuration with a factory-fitted hardtop option for the first time. There are three roof options available — a fixed soft top, a manually convertible soft top, and a hardtop. The rear end of the new Thar gets rectangular tail lamps and a spare wheel mounted on the tailgate.

At the interior, the spartan dashboard layout making way for a 7-inch touchscreen in the center which gets both Apple CarPlay and Android Auto connectivity. Other noteworthy features include a multi-function steering wheel, multi-information display, automatic climate control, cruise control, and a tyre pressure monitoring system. the speakers have been mounted on the roof and the front power window switches have been slapped in the central console. The rear seats in the new Thar are forward-facing bench seats that get adjustable headrests as well.

On the safety front, an internal roll cage is available along with three-point seat belts and dual locks on the hardtop and convertible variants. Other safety features are dual airbags, ESP with vehicle dynamics control and rollover mitigation, hill-hold and hill descent control, ISOFIX child seat mount and a tyre pressure monitoring system.

Check out these upcoming cars Toyota Urban Cruiser, Hyundai Tucson, and Kia Sonet.
Also, check out our review of the Renault Triber.