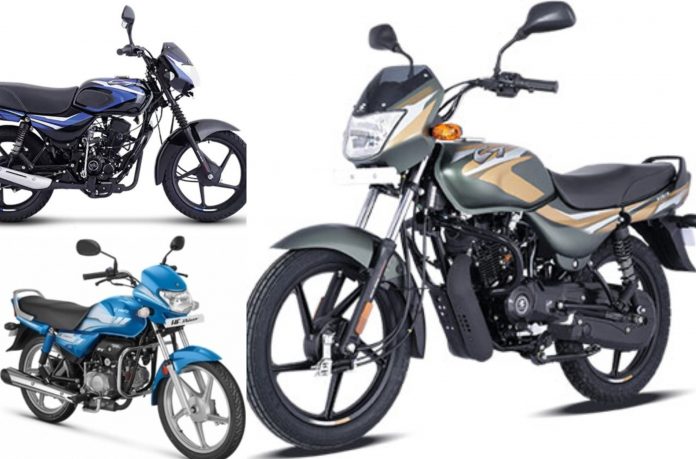 If you have a tight budget and want to buy a good motorcycle, then follow our list of best motorcycles under Rs. 50000 and make the right move.

The CT100 model of the Indian automaker is available at the starting price of INR 43,994 and goes up to INR 51,674 and that is a suitable amount for your pocket.

Bajaj CT 100 is slightly different from its bs4 predecessor in the term of looks and design. Only the color scheme of the engine, suspensions, and wheels. It gets the blacked-out engine, suspension, and alloy wheels. A halogen headlamp, bulb tail lamp, and bulb turn indicators have been featured in this latest bs6 model. Also, it gets a spartan twin-pod analog instrument console that includes the speedometer and telltale lights. The CT100 is powered by the 99.3cc single-cylinder engine, a fuel-injected unit that produces 7.7bhp and 8.34Nm of torque and comes mated to a four-speed gearbox. The company claimed an average of 89.5kmpl for this motorcycle. It is available in Black, Green, and Red colors.

The HF Deluxe model of the Indian automaker is available at the starting price of INR 47,800 and goes up to INR 58,000 and that is a suitable amount for your pocket.

Hero HF Deluxe is the manufacturer’s first entry-level, BS6-compliant motorcycle. The long single-piece seat is amply cushioned and the motorcycle gets a single-piece grab rail for the pillion. The motorcycle’s engine now gets a fuel-injection system and ‘XSens Technology’ which adjusts the air-fuel mixture on a real-time basis through the help of 10 sensors. The Hero HF Deluxe BS6 is powered by the 97.2cc engine which outputs 8.02PS at 800rpm and torque of 8.05Nm at 6000rpm and comes mated to a four-speed gearbox. If we talk about the brakes, it includes 130mm drum with a combined braking system and the alloy wheels are shod with tubeless tires on both ends. The mileage of Hero HF Deluxe is 65 kmpl according to the reports of the owner of the motorcycle. Hero HF Deluxe is available in Blue, Grey with Green, Grey with Black, Black with Purple, and Black with Red.

The Bajaj CT110 is available at the starting price of INR 49,613 and goes up to INR 52,019 which is quite interesting, keeping in mind the powerful engine.

The CT100 is Bajaj Auto’s one of the highest-selling two-wheelers in the market. Based on this entry-level commuter, the manufacturer has introduced a slightly premium version of the bike in the form of the CT110. The CT110 gets a braced handlebar, tank pads, color-coded rim tapes, and fork gaiters. The Bajaj CT110 powered by the 115cc which outputs 8.6PS at 7,000rpm and 9.81Nm of peak torque at 5,000rpm and comes mated to a 4-speed transmission. If we talk about the brakes, it consists of 110mm drum units at both ends. The mileage of Bajaj CT110 is 65 kmpl according to the reports of the owner of the motorcycle. Bajaj CT110 is available in Black, Olive Green, and Red. It is one of the best motorcycles under INR 50000.

This was the list of best motorcycles under INR 50000.
If budget is not an issue then, check out Motorcycles To Be Launched in India.

Not the fan of budget-oriented motorcycles, then check out Top 5 Sports Bikes In India.