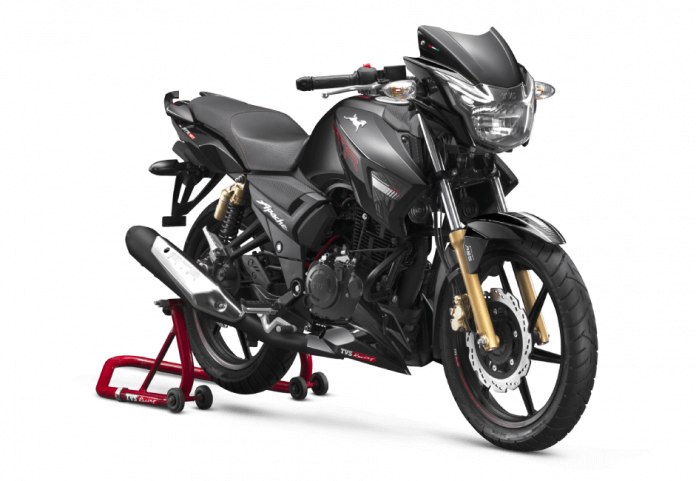 TVS Apache RTR 180 was launched in the month of March, earlier this year. It has been updated to the BS-6 compliant engine to meet the new norms. The new Apache RTR 180 is a commuter bike available in only a single variant in India.

TVS Apache RTR 180 features a 177.4 cc fuel-injected motor that outputs 16.79 PS of power at 8500 rpm and 15.5 Nm of torque at 7000 rpm. The output power is 0.17 PS more than the BS4 version but the torque remains the same. The engine is mated to a 5-speed manual transmission gearbox.  If we talk about the brakes, then it is equipped with disc brakes at both ends with single-channel ABS.

The new TVS Apache comes with a halogen headlamp, LED DRL, and tail lamp. The indicators are of bulb-type. The main highlights are Digital Speedometer, Analog Tachometer, Digital Trip Meter, Digital Odometer, Digital Clock, ABS Light, and Digital Fuel Gauge. Other features include low battery and low fuel lights, and maintenance indicator apart from other telltale lights. It also gets a 0-60kmph acceleration timer, which will be appreciated by enthusiasts. The motorcycle comes with a Super-Moto ABS, which is essentially TVS’ jargon for single-channel ABS. Another notable feature is the Glide Through Traffic function, which ensures the bike can crawl at low speeds simply by clutch modulation and no throttle.

This variant is available in 4 colors, T Grey,Gloss Black,Matte Blue, and Pearl White.

First we mention the good things :

Then we mention the not so good things :

So, the final verdict is that it’s a good motorcycle, and anyone should take this deal. In the competition, there is the newly launched Honda Hornet 2.0, check out our article on it.

KTM Duke 200 – Made In India Launched In USA