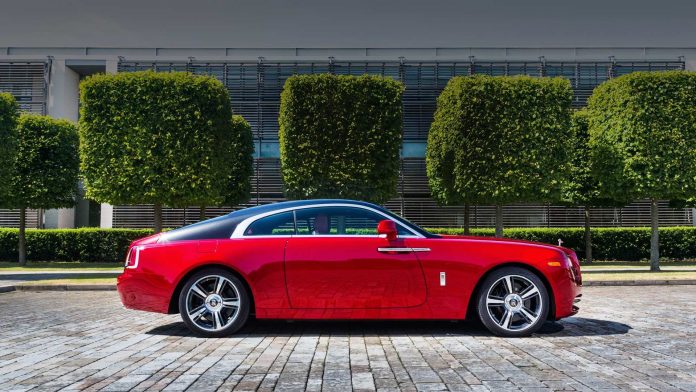 The Rolls Royce Wraith was launched back in 2013, and it is arguably the fastest and no doubt the most powerful car of the Rolls Royce production to date, in the year 2020. The car named the Rolls Royce Wraith in honor of the original Wraith built by the original Rolls Royce Limited from 1938 to 1939. The vehicle was announced in January 2013 and unveiled at the 2013 Geneva Motor Show. The deliveries began in the fourth quarter of 2013. There are two tiers of the Wraith, Black Badge and Coupe. The only difference in their specification is the power output and the torque. And obviously the prices also.

The engine is 6.6 litres turbocharged V12 engine accelerates from 0 to 60mph in 4.4 seconds with a top speed of 250 kmph. If we talk about the brakes, there are Ventilated Disc brakes on both, front and rear wheels of the car. The RR Wraith can go from 0 to 100 kmph in just 4.6 seconds with a top speed of 250 kmph. The fuel average of the car is, as per the owners’ reports, is 10.2 kmpl, which is decent enough keeping in mind these splendid specifications.

In the car, there are only two doors available, and with a seating capacity of 4 people (including the driver). The dimensions of the car are, 5285 mm in length and 1947 mm in width, having a weight of 2810kg. The boot space in this Rolls Royce is pretty good, the boot space with a huge 470L is humongous at this price range. The car features the Hydraulic Power Steering and it is adjustable.

At the convenience and comfort front, a rear parking sensor and a rear parking camera are available, an electrically adjustable rearview mirror, keyless entry in the car, and a start-stop button. While on the security front, airbags, passenger airbags, and side airbags are given. Also, the tractional control, engine immobilizer, turn indicators on ORVM, and rain-sensing wipers.

KTM Duke 200 – Made In India Launched In USA