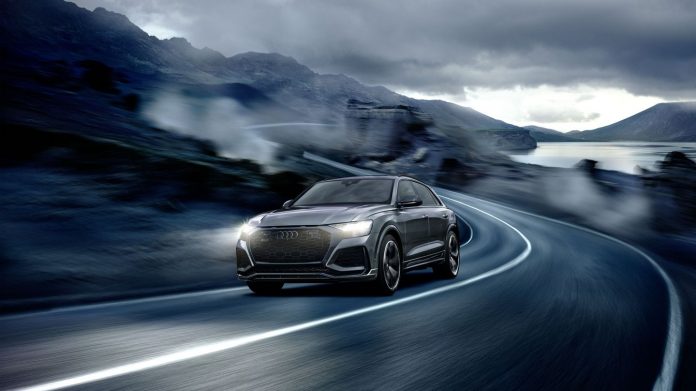 The German car manufacturer, Audi just revealed that it is going to launch its latest Audi RS Q8 in India, the launch will be probably in the month of August. After, launching several cars and luxury cars initially this year in the country, this is will be its latest car.

Just a few hours ago, Audi revealed the official teaser on its official Twitter account. In the latest 8 seconds video, the car manufacturer doesn’t reveal so much of the SUV. In the video, a green Audi RS Q8 is featured and the SUV is dubbed as “THE FASTEST SUV AT THE NÜRBURGRING”. Since not much of the details have been revealed in the featuring video, so we can make speculations from the RS Q8 version that was launched in the United States of America. The new RS Q8 is coming to India after a year of its launch at the Los Angeles auto show.

First of all, what seeks our attention the most is its tagline, “THE FASTEST SUV AT THE NÜRBURGRING”. But what does this mean?? What is NÜRBURGRING?? Why it is been focused?? Don’t worry, we are here to give the answer to your questions. The Nürburgring is the motorsports complex located in the town of Nürburg, Rhineland-Palatinate, Germany. It features a Grand Prix race track built in 1984, around the village and medieval castle of Nürburg in the Eifel mountains. It has been nicknamed as the old track “The Green Hell”.

It’s the RS Q8, the top of the line RS model. It featured the massive 600PS 4.0-litre twin-turbocharged V8 petrol engine that comes coupled with a mild-hybrid system for torque boost. The engine outputs 600PS of power and 800Nm of torque, the power is delivered to all four wheels with the Quattro all-wheel-drive technology with Quattro sport rear differential technology. The engine is mated with an 8-gear automatic transmission box. The acceleration of the car is quite good, that is, from 0 to 96 kmph in just 3.7 seconds, and the top speed of the RS Q8 is 250kmph. Certainly, that is helped by the massively powerful engine. If we talk about the brakes, it features the Ceramic brakes. As per the Audi USA website, the latest Audi SUV featuring a 10-piston brake caliper in this braking system features 17.3-inch front brake discs and 14.6-inch rear brake discs made from a ceramic-composite material that reduces unsprung weight by up to 75 pounds and offer improved fade resistance.

At the exterior, the new Audi RS Q8 gets a single-frame blacked-out grille and tastefully done 22-inch dual-tone alloy wheels that look meticulously finished. Even the front bumper features larger air dams that are sporty while the rear one comes with dual exhausts. On the interior front, it features a smart screen with three different UI and UX. There are seven different modes for the comfort of the driver, including customizable, driver-specified RS modes, the Audi drive select system offers a range of steering, suspension, and transmission shift programs to suit driving styles or road conditions.

What about the new RS Q8 pricing in India?

As of now the Indian pricing of the Audi SUV is kept unrevealed and from the specifications and the features that are discussed above, we can estimate that the pricing can surpass the one crore price mark. If we, directly convert the USA pricing, then it is priced at INR 86 lakhs.B ut we have to keep in consideration that direct conversions of the foreign market price are not appropriate. Since many taxes will be included and don’t forget that this price is a year old pricing.

Check out our article on Audi RS7.
Recently, the Toyota Corolla Cross has also been revealed.