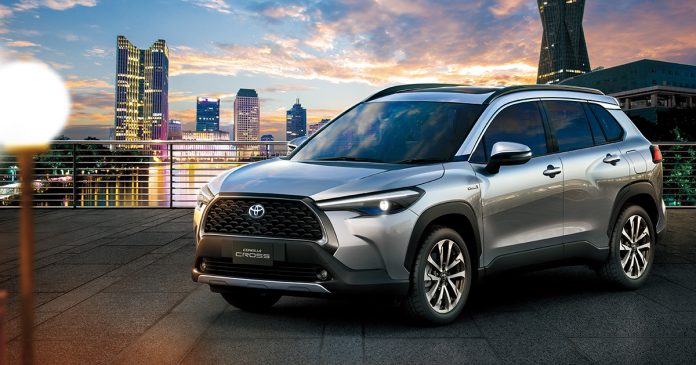 Toyota has unveiled its next-generation Corolla, the Toyota Corolla Cross. Toyota Corolla, which was launched back in 1966, was the best-selling car in the world by the year 1974. The name Corolla is part of Toyota’s naming tradition of using names derived from the Toyota Crown for sedans, with “corolla” Latin for “small crown”.

Recently, Toyota launched its SUV in Thailand. The global premiere for the new SUV took place on July 9. Corolla Cross will be hitting other markets soon in the future. The Corolla Cross is the crossover derivative of the Corolla sedan that much of the world is familiar with. The familiar sedan and new crossover are built on Toyota’s TNGA platform and there are commonalities in engines too.

The new 2021 Toyota Corolla Cross measures in 4,460 mm in length, 1,825 mm wide, and 1,620 mm tall. For the petrol engine, the average fuel consumption is 15.4 kmpl that makes 140hp and 175Nm of torque and comes mated to a CVT gearbox. A petrol-electric hybrid that features a 98hp, 1.8-liter petrol engine working in conjunction with a 72hp, the electric motor will also be on offer. The SUV is also powered by a 1.8-inch hybrid engine with a 4th generation hybrid system with average fuel consumption of 23.3 kmpl.

On the exterior, the bold grille, swept-back LED headlamps, and the muscular hood gives it presence especially when you view it head-on. The profile is neat and simple with dual-tone alloy wheels filling up the large wheel arches nicely. At the rear, the Corolla Cross looks simple with a pair of split LED tail lamps. The Corolla Cross gets a pronounced black grille as well as sharp headlights and LED daytime running lights. In addition, black bumpers, side skirts, and wheel arches add rugged appeal.

On the interior, the dashboard design is identical to the latest Corolla. Corolla Cross features the minimalist central console, which consists of a floating infotainment system and climate controls. Also, there are some features that are worth noticing include connected car technology, Apple CarPlay, dual-zone climate control, digital instrument display, power-adjustable driver’s seat, and a host of driver-assist features such as lane departure warning and radar-based cruise control.

The interior stands for a spacious room, comfort, adjustable luggage capacity, and a quiet cabin. On the safety front, there are seven airbags, ABS with EBD, a 360-degree camera, and a blindspot monitor.

The Toyota Corolla Cross has been launched in Thailand, and other parts of the world will follow soon. Toyota India has discontinued the Corolla sedan from the Indian market in the BS6 era.

Top 5 BS-VI Cars You Should Consider Before Purchasing