Home Motorcycles KTM Duke 200 – Made In India Launched In USA 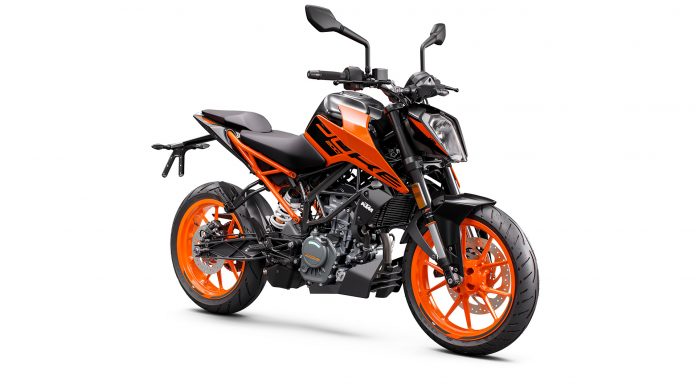 The India-made KTM Duke 200 has been launched in the USA very recently as the most affordable KTM motorcycle. The motorcycle has been priced at USD 3,999 which converts to about INR 3 lakhs. The KTM 200 Duke is made in India at Bajaj Auto’s Chakan production facility near Pune. The said model had been the entry-level model for KTM in India but now the baby KTM 125 Duke has taken up that title.

The KTM Duke 200 is USD 1,500 cheaper than the Duke 390 and also USD 749 more affordable than the Royal Enfield Himalayan. As far as tech-spec are concerned, it is almost the same bike that sells in the Indian market save for the fact that it gets a dual-channel ABS with Supermoto mode.

The naked street-fighter features a 199 cc, single-cylinder engine that outputs 24.6 PS of power and 19.2 Nm of torque. The engine comes mated to a 6-speed manual transmission. It rides on 43mm upside-down forks sourced from WP and a mono-shock at the rear. If we talk about the brakes, then a 300mm disc for the front and a 230mm disc at the rear are responsible for braking.

The KTM Duke 200 gets a halogen headlamp with LED DRLs, 17-inch alloy wheels, It gets an angular headlamp with the LED DRL, an aggressively styled fuel tank which now has a 13.5 litre capacity (10.2-litres on the earlier model) along with a sleek tail section with a split-seat setup.

About KTM Duke 200 In India

KTM 200 Duke is a commuter bike available in one variant in India. There is a same configuration as it outputs 24.6 PS of power and 19.2 Nm of torque from its 199.5cc engine. Single cylinder engine of 200 Duke has a 6 speed manual gearbox.

The difference is in the pricing as its price starts from INR 1,76,768 in India whereas, in the US, the pricing is much higher due to taxes and transportation costs. In terms of competition, the motorcycle goes up against the Bajaj Pulsar 200 NS, and the TVS Apache RTR 200 4v.

Check out other Made in India motorcycles.
Also, check out KTM Duke 250.