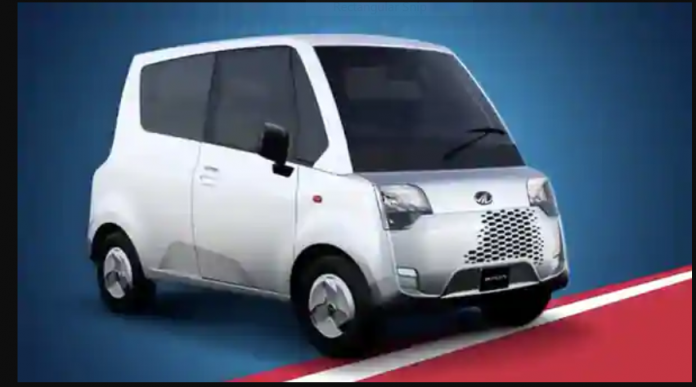 Nowadays the craze and hype of the electric cars are all around the globe and India is also enjoying its all-around hype. Recently, Mahindra unveiled its latest electric vehicle which is aiming for small families and economic completion of a journey.

The company had showcased its quadricycle Atom at the Auto Expo 2020. The launch of the vehicle was expected to take place this year. But it has been postponed due to the ongoing Covid-19 pandemic. A short video consists of the unveiling of the vehicle posted by their official twitter account with a caption, that is targeted for “new-age urban people” and “Smart India’s” needs.

The Mahindra Atom is a four-seater quadricycle, that has been built for commercial use especially to provide last-mile connectivity in urban setups. The company claims that the new vehicle will get a taller but sturdy frame along with ‘maximum comfort’, large glasses to get an airy feel within the car.

The Atom will come with standard features like seat belts and air-conditioners. However, there will be no airbags or ABS safety features in the electric vehicle. The company also claims that the car will be equipped with a state-of-the-art connectivity system. The car is expected to get a 15kW motor and a lithium-ion battery. The vehicle just gets two doors. Ingress will be easy as the door opens wide.

The price of the Atom electric quadricycle is expected to be in the range between ₹3 and 5 lakh. As it can already be expected that the company aims to launch the Atom as India’s most affordable electric four-wheeler.

Check out our article on What are Hybrid Cars and their benefits and Best Hybrid Cars.

Top 5 BS-VI Cars You Should Consider Before Purchasing