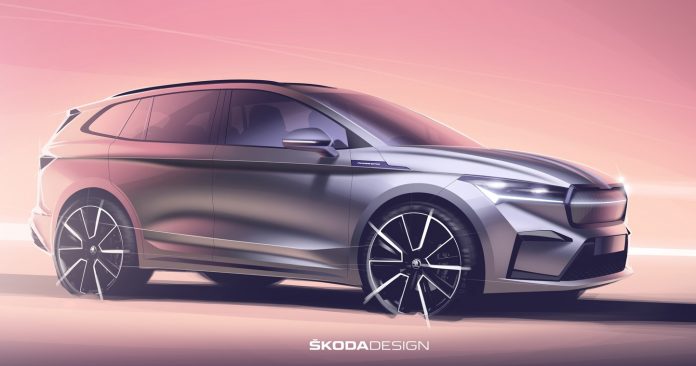 Škoda has revealed its first purpose-built electric car – the Enyaq iV. With the ENYAQ iV, ŠKODA is taking another leap into the era of electric mobility. Inspired by the Vision iV concept presented in March 2019 in Geneva, the Skoda Enyaq will be available in five versions, in both rear- or all-wheel drives, and the deliveries will begin next year. The Czech car manufacturer’s first all-electric SUV also takes a fresh approach to lighting design, combining technically innovative full-LED matrix headlights with an emotive design language.

Škoda has confirmed that similar to other cars based on the MEB platform, the Enyaq will be offered with a choice of rear and four-wheel drive, three battery sizes, and five power outputs. The Czech electric SUV is available in five versions: three rear-wheel drive and two four-wheel drive. Depending on the configuration, the total power varies from 150 PS to 306 PS. The largest battery will be a 125kW unit with an official range of 499 kilometers. On the top of the range, the RS version will be able to reach 180 km/h of maximum speed and can reach from 0 to 100 in 6.2 seconds.

Skoda claims its designers have exploited the MEB platform’s lack of transmission tunnel and long wheelbase to create a cabin that’s “visually even airier and to create a feeling of even more space”. On the exterior, Enyaq iV is characterized by its LED-backlit grille, sculptural lines, with a short front and large wheels, as well as a generous height. Being an electric car means the Enyaq iV doesn’t need a large grille opening to cool a hot engine. The Founders Edition is available in two engine/battery variants and two colors. It also comes with 21-inch alloys, sporty front, and rear aprons, and the ecoSuite Design Selection featuring sustainably tanned leather.

At the interior, there is a more spacious compartment. The horizontally developed dashboard is characterized by the presence of the large 13-inch infotainment display. The instrumentation is digital. A head-up display can also be obtained on request. The cabin can be customized thanks to the use of natural, recycled, and sustainably produced materials. The 585-litre luggage compartment is proof that the car is truly spacious.

What Are Hybrid Vehicles And Their Benefits