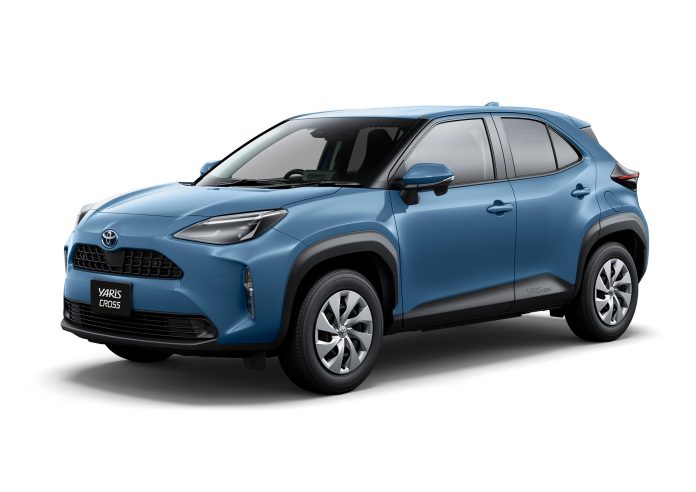 Toyota has launched the Toyota Yaris Cross in Japan yesterday. It is a compact SUV based on its much anticipated Suzuki-Toyota partnership such as Toyota Urban Cruiser, Toyota Corolla Cross, and Toyota Glanza. It is Toyota’s first compact vehicle to adopt the TNGA platform and also the first to feature an electric four-wheel-drive system.

The all-new Yaris Cross is Toyota’s first compact vehicle to adopt the TNGA platform (GA-B) and is available in petrol-hybrid powertrain configuration. The Yaris Cross features a new-generation hybrid electric vehicle system which uses a 1.5-liter inline three-cylinder Dynamic Force Engine based on the TNGA philosophy. This petrol-hybrid combination outputs a combined power of 92 PS and 120 Nm of peak torque. The engine is mated to a CVT gearbox unit. Toyota is also offering HEV models featuring the E-Four (electric 4WD system) for the first time in a compact car.

On the exterior, the front is having a three-dimensional structure with the central front, lower front, and fender providing a strong and well-balanced finish. At the rear, the SUV gets a square-shaped central portion and a large back door opening.

At the interior, the Yaris Cross compact SUV cabin space has an urbane and comfortable feel. The SUV gets a TFT color LCD multi-information display audio, Head-Up-Display (HUD), and soft padding made from slush molding is used at the top of the instrument panel. In addition to it, new material is extensively used for the door trim. Smartphone applications and other functions can be linked with SmartDeviceLink and Apple CarPlay, and Android Auto.

Check out the latest launches of Hyundai Tucson, and Kia Sonet.