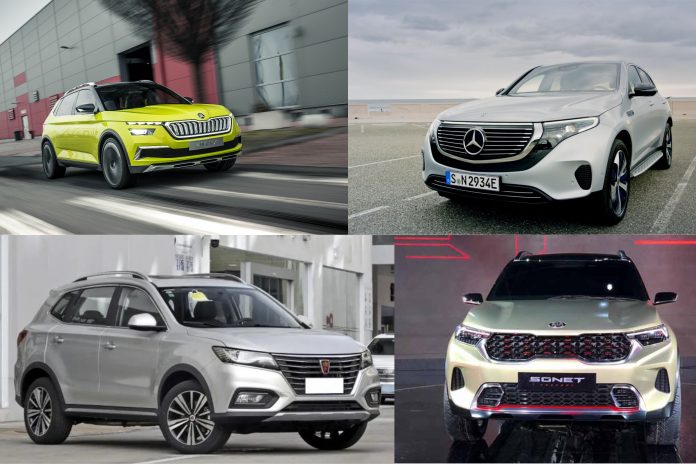 As half of the year is passed and the half is going to pass. There are a number of cars that are going to launch in the remaining half. Here, is the list of the upcoming cars in India.

Upcoming Cars in August 2020 in India

This South Korean automobile company just announced that the Sonet will debut globally on 7th August 2020. Unlike other Kia Motors car models, it will be the entry-level SUV in India.
Prices are expected to start from INR 7.5 lakh.

The Sonet is expected to make use of the Venue’s petrol engines, that is, the 1.2-litre naturally aspirated and the 1.0-litre turbo-petrol. The diesel engine is likely to be borrowed from the Seltos, that is, the 1.5-litre diesel. All these engines are BS6 compliant. The only automatic for the SUV is expected to be the 7-speed DCT with the 1.0-litre turbo-petrol engine.

This Czech automobile manufacturer will launch its Vision X model on 1st August 2020.
The car will debut at the expected price of INR 14 lakhs. It will be directly competing with the MG Hector Plus, Mahindra Scorpio, and Tata Harrier.

This British automotive manufacturer doesn’t specify the date, but it is likely to be launched in the month of August. It will be directly competing with the Toyota Fortuner, Ford Endeavour, and Kia Carnival. The prices are to start from INR 25 lakh.

MG ERX5 is going to use the Permanent Magnet Synchron engine which delivers the output of up to 114 bhp and torque up to 255 Nm. It also features an automatic transmission. The dimensions of the car are pretty impressive, it is having a length of 4554 mm, a width of 1855 mm, and a height of 1716 mm.

This Germany based automotive legend is scheduled to launch its latest EQC model in July 2020. But it hasn’t been launched yet. Hopefully, it can be launched in the month of August. It is expected to price around INR 75-80 lakh.

The car is yet to launch, so there is no official announcement for specs but from the German launched Mercedes-Benz EQC, we can expect the electric engine that delivers 408 hp and can reach 0-100 km\h in 5.1 seconds with the top speed of 180 km\h. The dimensions of the car are notable, having a length of 4762 mm, a width of 1884 mm, and a height of 1624 mm.

So tell us in the comment section what you think about the upcoming cars and which car or cars are you thinking about buying.

Check out our article on the top 5 BS-VI cars in India.
Read Renault KWID RXL launched in India.

Harley Davidson Street 750 Gets A Price-Cut